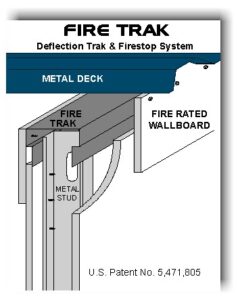 The Fire Trak System uses standard materials that are used to construct the wall. No special training of installers is required.

Life Cycling
This issue seems to be a shortcoming of most systems, the Fire Trak System is not affected by repeated movement of roof or floor decks. It maintains its firestopping effectiveness indefinitely. Life cycling will be more important with new test standards under development.

Sound Control
The Fire Trak System creates such a tight seal that its superior sound control characteristics may have applications even when the walls do not have to be firestopped.

Environmentally Friendly
The extra wall cladding material used in the Fire Trak System is usually smaller pieces of wall material that normally have to be hauled to a landfill as scrap.

Economy
The Fire Trak System can often be installed for a fraction of the cost of other tested systems.